History of The Stable Yard

The Stable Yard is an artisan food hall which contains a chocolate café, restaurant, ice cream parlour, bakery, pizzeria, sweet shop, deli, and mediterranean food store, which are all based around a network of old medieval City lanes and yards, connecting the main streets of the merchant’s quarter to the old City. Throughout the Stable Yard, you will find a history trail detailing the 1000-year story of these historic lanes. 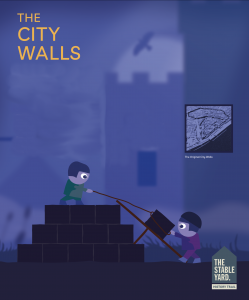 Prior to the 12th century, this part of Waterford lay outside the City walls. As more and more houses were built in the area, it became necessary to extend the City walls to protect the growing community and under King Henry III the City walls were extended to surround this area, and by 1540, the full network of stone walls and towers were complete.

Barronstrand St. is derived from its historical name ‘’Barry’s strand’’ which may have been the name given to the area of riverbank at the bottom of the Street, and where perhaps a family named ‘’Barry’’ lived and likely operated a business.

By 1705, much of the City walls were demolished in order to make way for urban development, and the stone from the walls was used to extend the city quays. This development allowed Barronstrand St. to become the city’s main street, and over the next 100 years, the city and quays were able to grow, with development culminating in the construction of the very first permanent bridge over the river Suir in 1793. 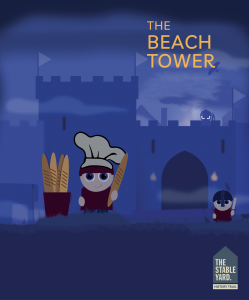 This 15th Century tower formed part of the City walls, built on a rocky outcrop with cliffs either side, in what is now known as Jenkins Lane. The area downhill from the tower towards the river remained outside the City walls, which is where the tower got its name as it overlooked a beach along the river. The design of the tower is unusual in that access is from the top of the cliff into the upper floors, with access to the lower floors, via an internal ladder.

The Tower has a superb view of the upriver approaches to the City, from the Tower, one can see 4km upriver to Grannagh Castle so that a warning light could be seen in an emergency.

In the 16th century, several of the City’s towers passed into private hands, on condition that they be structurally maintained for defensive purposes, should they ever be needed. In the Great Parchment Book of Waterford, the Tower is listed as ‘’Bakers Tower’’, perhaps suggesting one of the subsequent uses the Tower was put to. During the 20th century, the Tower was used as a water tower with a large water tank built on top.

The owner of the Stable Yard came into possession of the Tower in 1981 and donated it to the City for posterity. The Tower was restored by the Waterford Civic Trust and was reopened by Uachtaran na hEireann – Mary Robinson in 1996. 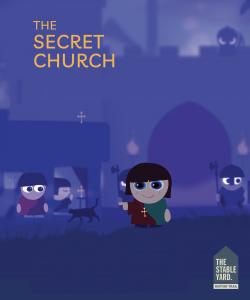 During the 16th Century, a thatched store stood on this site which was the only place of worship for the Roman Catholics of the City.

The location of the Store was ideal, within the network of old Medieval lanes and yards which connected the Quays with the centre of the old walled town. The network of lanes allowed parishioners to discreetly travel to and from the ‘’Church’’.

The thatched store served this purpose for over 100 years, from the reign of King Henry VIII, who persecuted Catholics, in the late 1530’s until 1693 when, following the reign of James the II of England, a new purpose built Church was constructed in Barronstrand St, just across the road, on the site of the present Cathedral of the Most Holy Trinity, which was subsequently built in 1793. 14 years earlier, the same Architect, John Roberts designed Christ Church Cathedral, located in the Viking Triangle.

Once the new church in Barronstrand St was constructed, the thatched building could then revert to its original function as a merchant’s store. 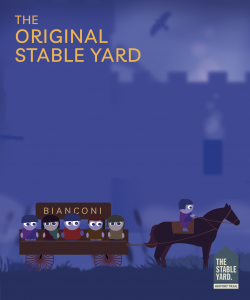 They operated with 1,400 horses and a fleet of jaunting cars and stagecoaches which connected towns and cities across the country: with a fast, reliable, and cost effective service.

Every day the Bianconi network served 123 towns and covered 3,800 miles of road with a network of Inn’s and hotels along the way which operated as staging posts with interconnecting routes.

One of these hotels is the Granville Hotel, originally known as the Commins Commercial Hotel. It served as the main transportation hub for the region, with a large stable yard at the rear to look after the Horses required to service the Waterford routes. The courtyard which still stands, was originally the Bianconi Stable Yard.

Charles ‘Carlo’ Bianconi, from Lombardy in Italy, moved to Ireland in 1802 at the age of 16, to train as an engraver in Dublin before moving to Carrick-on-Suir at the age of 20 to set up his own engraving business.

Around 1815, he decided to start the Bianconi Coaches using the cheap horses available following the Battle of Waterloo. By 1865, Bianconi had an annual income of £35,000 (which is equivalent to €3m today).

By this time Bianconi had been Mayor of Clonmel twice and was becoming a significant landowner, with 8,000 acres centred on his house Longfield, overlooking the Suir, a house he had first admired 40 years earlier as a poor young man just arrived from Italy.

THE FIRST PRESIDENT OF IRELAND 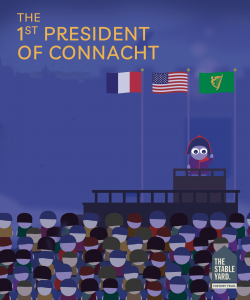 During the 1798 rebellion, there were three attempts by France to send ships to support the united Irishmen.

The United Irishmen were inspired by the ideals of American & French revolutions. On August 22nd, two months after the main uprising had been defeated, an expedition of 1,000 French Soldiers landed in Irelands North Western province of Connacht.

With the help of up to 5,000 local rebels, they quickly captured the town of Castlebar, where General Humbert declared the Irish republic and named John Moore the 1st President of Connacht. Moore had grown up in Spain and educated in France, but had recently returned to his family home in Ireland to study law.

Moore was tasked with raising an army of 12,000 men ”inclusive of every individual from sixteen years of age to forty”, but the rebellion only lasted 5 days before the French and the rebels had to surrender to a vastly superior force.

Moore was to be sent to London for trial, but by the time he arrived in Waterford on December 6th, he was already seriously ill, after spending almost a year in jail. He was held at a Coaching Inn on the site of The Stable Yard, where he died during the night at the age of 36. In all around 10,000 people died over the course of the 1798 rebellion.

He was buried in Ballygunner just outside the City where he lay forgotten for over 150 years, before his grave was eventually discovered by chance in 1960. He was given a full state military funeral back in Castlebar, attended by the President of Ireland Eamon De Valera, along with ambassadors from France and Spain.

At the grave side the president said: